The UK’s top independent craft breweries, started in 1995 or later, have increased their turnover by nearly five-fold since 2011/12, when it stood at just £27m (see graph below). 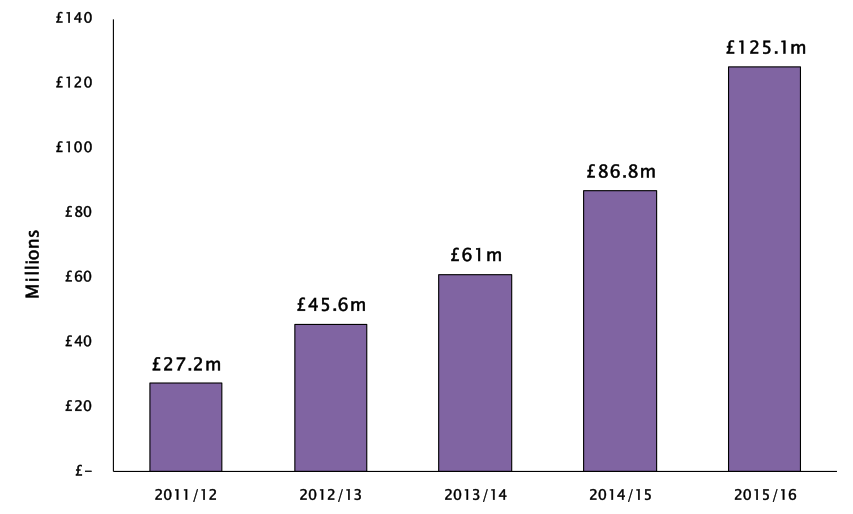 Funding Options says that BrewDog, as well as making up nearly 60% of the Top 30’s turnover, has been the driving force behind the industry’s growth, and remains the standard-bearer of independent craft beer in the UK.

BrewDog was one of the first of the new wave of craft breweries to push their way onto prominent supermarket shelf space, which might have previously been occupied by international beer brands from mega breweries.

Funding Options adds that the independent sector’s turnover would have been far larger had it not been for numerous sales of independent brewers to private equity firms and larger drink companies.

Funding Options says that more and more entrepreneurs are opening breweries having been attracted partly by the potential of selling their brewery on to a larger competitor. A record 520 new breweries were launched in the UK last year**.

“The UK’s craft beer revenue growth has actually accelerated slightly in the last year, which is a phenomenal result.”

“Many of the UK’s most prominent craft brands have achieved widespread success and have attracted huge buyouts, and a new group of smaller companies will have similar aspirations.”

“While the more established craft breweries can finance their own growth, it is the newer companies that often need additional finance to give them a leg-up and help them reach their full potential.”

“For every successful craft beer, there will be many more who haven’t been able to give success a proper shot – this is often down to a lack of competitive finance.”