SME housebuilders’ profit margins are lagging behind their larger counterparts by nearly a third this year as they struggle to secure competitively priced debt, says Funding Options, the online business finance supermarket. 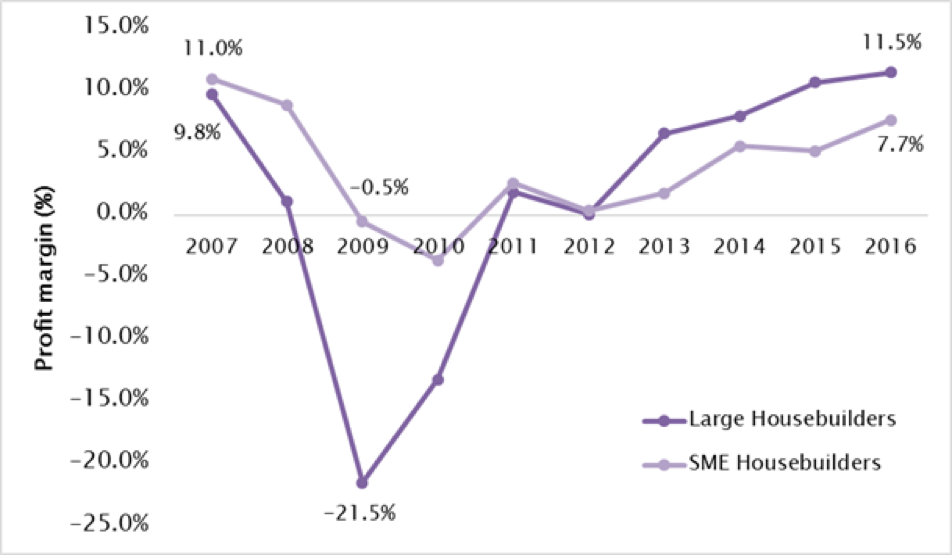 One reason, says Funding Options, is that small housebuilders are struggling to get funding from banks. SMEs are often perceived by the banks as higher risk than their larger rivals, which drives up interest rates on lending to small businesses, and compresses profit margins.

All but the best capitalised businesses in this sector can struggle to get bank funding, as housebuilding is a sector that banks remain wary of following a large number of defaults and insolvencies during the credit crunch and recession.

Changes in banking regulations since the financial crisis mean it can be less profitable to provide loans for smaller businesses, as banks need to hold more capital to lend to SMEs than to larger housebuilders.

Funding Options explains that because many small housebuilders are unable to secure competitive funding from banks, they are struggling to take on the number of projects needed to meet the government’s housebuilding targets. This could worsen the current housing crisis: just 141,700 new builds were completed in the twelve months to September 2016, of the 200,000 completions per year that were needed to reach the Government’s target.

Funding Options adds that small housebuilders in particular may further be impacted by the fall in sterling in the wake of the Brexit vote, as import costs of materials such as steel or copper increase.

“Small housebuilding groups are struggling to keep pace with larger competitors, in large part because of a lack of available financing which reduces their ability to take on larger, more profitable building projects.”

“Without sufficient financing small housebuilders are not able to take on as many projects, including those in many inner-city and brownfield sites which can often be uneconomical for larger builders to develop. As a result, it is even harder for the government to address the housing crisis and meet their building targets, and it is more difficult for SMEs to catch up with larger rivals.”

“Although funding costs from banks are often too high to justify lending to small businesses, other options are made available to SMEs via the Government’s Bank Referral Scheme. The scheme aims to help small businesses find alternative finance by referring them to one of three designated finance platforms, including Funding Options.”

“With SMEs facing a funding shortage, they need to be able to secure loans from elsewhere in order to take on bigger developments and improve their profitability. Alternative finance options such as invoice financing, unsecured loans and peer-to-peer lending can often help to bridge the funding gap and allow them to start more projects.”